Search Results for: state of the shore 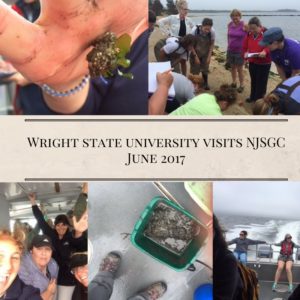 Here’s to another successful trip with Wright State University!

Ocean Fun Days are here again! Enjoy two days of free family fun at this annual event focused on New Jersey’s coastal environment. On Saturday May 21 Ocean Fun Days takes place at Island Beach State Park in Seaside Park, N.J. and on May 22 the event will be held on Sandy Hook at New Jersey Sea Grant Consortium’s headquarters in the historic Fort Hancock section of the park.  Both days are rain or shine from 11 a.m. to 3 p.m. and admission and parking are free.

Be sure to enter the free drawing for a chance to win a Jenkinson’s Family of Five Fun pack. This prize includes passes to the beach, amusements and mini golf, plus admission to Jenkinson’s  Aquarium in Point Pleasant Beach.

New for this year is the “Picture-This, Caption That!” challenge. Students in grades 3-5 and 6-8 created photos with captions depicting how they conserve energy and help preserve our natural resources. At Ocean Fun Days, visitors will be able to cast their vote to select two winners who will receive guided field trips for their entire class to either Island Beach State Park or Sandy Hook.

“Each year we look forward to partnering with New Jersey Natural Gas and all our partners and exhibitors to offer this free event to the public. Everyone involved is truly committed to our state’s incredible shoreline and shares in our goal to educate the public about its sustainable use and care,” notes Claire Antonucci, executive director of New Jersey Sea Grant Consortium.

One of the biggest coastal stories this week was the release of 10 three-year research projects on the health of Barnegat Bay. The projects were commissioned by the state Department of Environmental Protection managed in part by NJSGC. END_OF_DOCUMENT_TOKEN_TO_BE_REPLACED

The Institute on Science for Global Policy, in partnership with the Barnegat Bay Partnership and the Barnegat Bay Foundation will convene a forum titled “The Shore’s Future: Living with Storms & Sea Level Rise” on Nov. 20 and 21 in Toms River, the Sandpaper reported.

Dr. Michael Schwebel, the community resilience and climate adaptation specialist for NJSGC and Monmouth University’s Urban Coast Insititute will be one of the panelists during that that forum.  Read more about how Dr. Scwebel will participate by clicking here.

END_OF_DOCUMENT_TOKEN_TO_BE_REPLACED

It was three years ago this week that Hurricane Sandy pummeled the Jersey Shore, the banks of the Hudson River and the Meadowlands, with a massive storm surge on top of a very high tide. Largely, the state media took the chance to take stock of what has happened since.

Should N.J. have left Hurricane Sandy inlet open? (VIDEO) — Today’s video focuses on Mantoloking, a town on the northern barrier island in Ocean County where Sandy cut a pair of new inlets (or re-opened an old one). There, officials made a decision to quickly close the gap, driven by a desire to restore traffic and make whole the owners of a half dozen expensive homes in one of the wealthiest towns on the state. Read more at NJ.com.

Union Beach 3 Years After Sandy: Then and Now — It has been three years now since Hurricane Sandy decimated the Jersey Shore. Union Beach was one of the towns that was hit hardest by the 2012 fall storm. Read more at NJ.com.

North Jersey’s on guard against the next superstorm — From adding a pump station in Little Ferry to elevating Borough Hall in Moonachie, officials in the low-lying areas of the Meadowlands – which suffered devastating flooding from Superstorm Sandy – say they have spent the last three years fortifying their towns to better survive another major storm. Read more at the Record.

END_OF_DOCUMENT_TOKEN_TO_BE_REPLACED

This week, a drone pilot captured footage of a young humpback whale feeding near shore in Ocean City and other locations, according to an NJ.com report. But, capturing footage like that may be soon be illegal in the barrier island town. An OCNJ Daily report says that the City Council has approved a ban on drones in the city, voted the Garden State’s Favorite Beach town, in the first of two votes required to pass the ban.

And, she’s back. Mary Lee, the now infamous great white shark, returned to New Jersey waters this week. No one is sure where she might head next. Read all about it at NJ.com.

Ecosystem Recovery After Dragging Debris, Homes From Waterways — Virginia Rettig, manager of the Edwin B. Forsythe National Wildlife Refuge noted that her agency removed nearly 2,000 tons of debris left behind from Sandy. The $13 million project overseen by the U.S. Fish and Wildlife Service, involved cleaning up over 30,000 acres of saltmarsh and coastal habitat in areas of Brick, Stafford, Eagleswood, Tuckerton and Lacey. Around 1,900 tons of debris from 22 miles of coastline was removed. Read more at Micromedia Publications.

END_OF_DOCUMENT_TOKEN_TO_BE_REPLACED

Stinging jellyfish target of Toms River cleanup — Stinging sea nettle jellyfish, the bane of swimmers and others who enjoy Barnegat Bay, will be targeted in a bulkhead and dock cleanup Monday. State officials and volunteers will scrub bulkheads and floating docks in a bid to curb the sea nettle population. Read more at the Asbury Park Press.

Is Barnegat Bay dying? — Is Ocean County doing enough to protect Barnegat Bay? That issue dominated an amicable discussion Tuesday between the Republican incumbents on the Board of Freeholders and their Democratic challengers, during an editorial board meeting at the Neptune offices of the Asbury Park Press.

The news of the week is undoubtedly Hurricane Joaquin and an accompanying storm. For most of the week there was uncertainty about whether the hurricane would make landfall or remain offshore. Regardless, New Jersey will likely be impacted by the Joaquin in some manner.

In preparation for the storm, Gov. Chris Christie declared on Thursday a state of emergency, according to a report in the Record. By Friday morning, forecasters predicted that the storm would veer away from the Garden State, according another Record report. However, a Nor’easter has the potential to dump 1/2-inch to 1-inch of rain accompanied by 35-mile-per-hour wind gusts.

THE FORMER OFFICERS’ club at Fort Hancock on Sandy Hook, where New Jersey Sea Grant Consortium has its headquarters, is now among the buildings available to be leased, according to a report on NJ.com.  The National Park Service, which controls the former Army artillery fort, is looking for non-profit organizations and private investors to hold long term leases on the club and 35 other buildings.

This New Jersey Monthly article on invasive species may not be about the Garden State’s coastal ecosystems, but it highlights a widespread problem nonetheless. The consortium is attacking invasive species on two fronts.

Mike Danko, the NJSGC marine recreation extension agent, is involved in a multi-state campaign to convince recreational anglers to throw-out bait packed in seaweed rather than dumping into the water.

And Dr. Louise Wooton, of Georgian Court University in Lakewood, has researched Asian sand sedge which is thriving in places like Sandy Hook and Island Beach State Park. Her research, Assessing the impact of the invasive Asiatic sand sedge, Carex kobomugi, on coastal dune communities in New Jersey, helped her craft parts of the consortium’s Dune it Right manual. END_OF_DOCUMENT_TOKEN_TO_BE_REPLACED

The Coast Guard has had their work cut out for them. A pilot was killed when his plane crashed in the Atlantic Ocean off of Atlantic City last week. The small plane was recovered from the sea floor. A tow boat sunk off Sandy Hook, and the captain was pulled alive from open water. It’s the second vessel to sink near Sandy Hook this month.

Meanwhile, NY Waterway will launch the first ferries built in New Jersey for at least a century.

Finally, Michael Dunphy, of Virginia Beach, won his third Belmar Pro championship this week while other surfers were helping children with autism learn to surf. END_OF_DOCUMENT_TOKEN_TO_BE_REPLACED