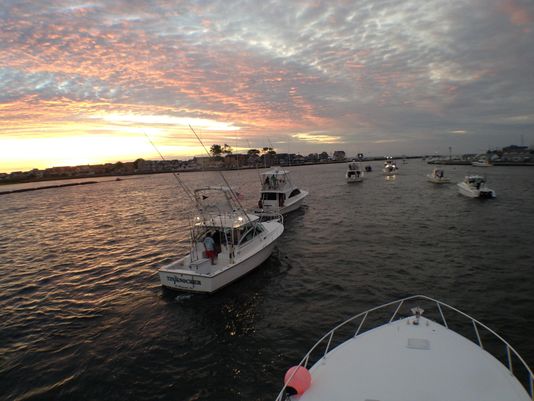 Boats head out of Manasquan Inlet last year for a day of fishing. Photo: John Oswald/For the Asbury Park Press

Right now, meteorologists are tracking Hurricane Erika. One model out of Canada does show that the storm could hit New Jersey, according to an NJ.com report. But, what’s more likely is the strom will make landfall somewhere between Florida and South Carolina. The storm will probably careen into the East Coast sometime late into the Labor Day weekend. Beyond that, the forecasts are just too unreliable because landfall in the United States is too far out in time.

“Is the Canadian model’s solution impossible,” NJ.com asked. “No. But should New Jersey panic? Hardly.”

“It’s not like you’re going to wake up tomorrow and realize you have 48 hours to react to something,” Gary Szatkowski, meteorologist-in-charge at the National Weather Service’s Mount Holly office, told NJ.com. “We’re in the heart of hurricane season — there’s nothing abnormal about this.”

Dr. Jon Miller, the NJSGC coastal process specialist based at Stevens Institute of Technology, Dr. Amy Williams, a post-doctoral researcher working with Miller, and Dr. Peter Rowe, the consortium’s director of research and extension, spoke about storm surge and the Coastal Storm Awarness Program in Long Branch.  The outreach program designed to help people living on the Jersey Shore understand the intricacies of storm surges was covered by the Asbury Park Press and the Atlanticville.

The three marine scientists, and others, made a second presentation in Cape May last weekend about surge and Dune It Right, the consortium’s manual for dune restoration projects. A final presentation about surge and dunes will be held Sept. 23 at the Ocean County Library on Long Beach Island.

The Marine Trades Association is sponsoring the annual Jersey Shore Boat Sale & Expo at First Energy Park in Lakewood. NJSGC is sponsoring the Kids Zone on Saturday and Sunday. Read a preview of the event scheduled for September 18-20 at BoatingIndustry.com, or at Trade Only Today. More information about the boat show can be found at www.jerseyboatexpo.com.

NJ.com — Family, friends remain hopeful for missing El Jefe captain’s safe return — The search for the missing captain of a sunken vessel continued on Aug. 27, as his family and friends expressed optimism for his safe return. State Police recovered Andresen’s fishing trawler, El Jefe, Aug. 26 close to shore near Buoy 14 in the Sandy Hook Channel. However, they could not confirm he was on board when the boat sank Tuesday evening. Read more.

Asbury Park Press — By the numbers: Sandy sunk New Jersey fishing — The fishing sector in New Jersey suffered nearly $300 million in estimated damages and lost earnings as a result of superstorm Sandy, according to a new report from the U.S. Department of Commerce. Read more.

Associated Press via NorthJersey.com — Feds seek to dismiss N.J. lawsuit against ocean blasting research — The federal government has moved to dismiss a lawsuit brought by New Jersey environmental officials against a research project that blasts the ocean floor with sound waves, mainly because the project is already finished. Read more.

The Record — Judge approves Christie’s $225M settlement with Exxon — The Christie administration secured a major victory Tuesday when a state judge approved a controversial $225 million environmental settlement with Exxon Mobil as compensation for extensive contamination on 1,800 acres of wetlands at the oil giant’s former refineries in Bayonne and Linden, as well as hundreds of other sites throughout the state. Read more.

The Asbury Park Press — Over the river: Is ferry trip a viable commute? — In a hot summer where mass transit has been snarled by everything from disabled trains to power outages, the ferry has been the calm and reliable alternative for the more than 2,000 commuters who use the boat terminals in Middletown and Atlantic Highlands. Read more.

The Record — Updating the power grid in the Meadowlands, with the environment in mind — Drivers on the western spur of the New Jersey Turnpike in recent weeks have likely spotted a thin line of bright yellow fabric girding the edge of the Meadowlands mudflats around North Arlington, Lyndhurst and Kearny. The fabric – which looks like a linear sculpture the environmental artist Christo might have created – is actually part of PSE&G’s effort to reduce disruption to wetlands as the company replaces transmission towers. Read more.

Asbury Park Press — Manatee spotted off coast of Point Pleasant Beach — A manatee was spotted off the coast of Point Pleasant Beach, which was likely the same one seen in Barnegat Bay waters two weeks ago, said Bob Schoelkopf, founder and executive director of the Marine Mammal Stranding Center in Brigantine. The manatee could take a turn into the Manasquan River. Read more.

The News Journal — Cape May-Lewes ferry a source of science data — Dana Veron, associate professor of geography in the University of Delaware College of Earth, Ocean and Environment, is looking at the factors that influence Delaware’s sea breeze to make determinations about the effeciency of wind energy. Veron has a sea-going partner in her research. Special sensors and monitors in the bow-thruster compartment of the Cape May-Lewes Ferry MV New Jersey take measurements of water temperature, salinity, dissolved oxygen and chlorophyll continuously as the ferry crosses Delaware Bay. The sensors measure barometric pressure, air temperature, humidity, wind speed and direction, water carbon dioxide and pH. Read more.

Asbury Park Press —With time running out, FEMA extends key Sandy grant —More than 9,000 homeowners in New Jersey are getting much-needed extra time to finish construction projects that are designed to protect their homes from coastal flooding. Read more.

NJ.com — Five ways Jersey Shore locals don’t get Bennies — Bennies (or shoobies, as they’re referred to in South Jersey) is an arguably derogatory term for tourists – especially arrogant, ill-behaved or ill-adapted tourists. It is advisable not to act like one. Read more.

NJ.com —Is the water in the Delaware Bay too warm? | Jim Bolton’s Outdoors Column — Angling in Delaware Bay hasn’t been great this season. Fisherman in South Jersey explain what they’re catching and what they aren’t. Read more.

NJ.com — Jersey Shore Fishing: 437-pound blue marlin in MidAtlantic — A 437-pound blue marlin caught on Fish On was checked in at the first Tuesday weigh-in of the Mid-Atlantic Tournament in Cape May and Ocean City, Md. The fish was well short of Monday’s 543-pounder on Ringleader, but it is still in line for a pay-off of $189,904.80 should no one catch any other eligible blues in the tournament. Read more.

NJ.com — Jersey Shore Fishing: Kids outfish adults on Matraxia’s fluke trip — Youngsters had the upper hand today during Tank Matraxia’s annual family and friends fluke trip out of Atlantic Highlands on the Mariner. Matraxia had over 30 people aboard including Jeff Dement and his interns from the American Littoral Society tagging fluke over 14 inches. There were 34 tags applied to those larger shorts plus one lone sea bass hooked. Read more.

Asbury Park Press — Sailboat is Barnegat man’s office — Capt. Dave Basile, 63, a former postmaster in Long Branch, planned to sail down to the Florida Keys and Caribbean in the 35-foot Irwin Yachts sloop with his family upon his retirement from the post office in 2012. Instead, he began taking over-bookings in 2004 from a friend who ran a charter business in Barnegat Bay. In 2007, he launched his own company: Jersey Coastal Adventures. Read more.

Two River Times — 130 slip Highlands marina to be ready for 2016 season — Sandy Hook Bay Marina is planning a formal ground breaking ceremony for Thursday, Sept. 10, at 4 p.m., to celebrate the next step in building and expanding the 130-slip marina in the Waterwitch area of the borough.

Press of Atlantic City — Hammonton water pollution all cleaned up, town says —  An almost five-year, $5 million project to get rid of pollutants in the town’s water supply has come to an official end, with all the municipal wells remediated and final paperwork with the state signed. Read more.

Essex County Place — Officials Announce Federal Grant for South Orange River Greenway Project — The new part of the greenway will be constructed along the East Branch of the Rahway River, and when completed, bicyclists and pedestrians will be able to travel along a paved path from West Parker Avenue in Maplewood to New Waterlands Park in South Orange. Read more.

Two River Times — County river front park a reality in River Plaza — Long envisioned, a waterfront park will now become a reality at a site that is currently home to Chris’ River Plaza Marina. The parties involved are expected this week to close on the $3.81 million sale of the approximately 14 acres that will be the newest Monmouth County park, to be called Swimming River Park. Read more.

Patch.com —Something Stinks In South Seaside Park; Residents bombard Township Council members with complaints about Route 35 reconstruction, smells, excessive flooding — The smell from odors emanating from the pump stations along Route 35, reconstructed in the aftermath of Hurricane Sandy, are like no other, Roberts Avenue resident James Fulcomer said. The odors got so bad residents thought maybe there was a gas leak and asked New Jersey Natural Gas to investigate. Read more.

Asbury Park Press — Berkeley officials concerned about Barnegat Bay discharge — Township officials have called on the state to investigate the operations of a new stormwater system that they say has led to brown plumes of water being regularly discharged into Barnegat Bay. Read more.

ShoreNewsToday.com — Historic A.J. Meerwald sets sail for interactive education — The A.J. Meerwald, New Jersey’s official tall ship, is moored at Utsch’s Marina on Route 109, on the east side of the Cape May Bridge, where it will be available for public sails until Sept. 5.  The ship is operated by the Bayshore Discovery Project, a nonprofit organization whose mission is to preserve the history, culture and environment of New Jersey’s bayshore region. It is a “floating interactive classroom” for educational programs in the Delaware Bay and other ports in the New Jersey, Pennsylvania and Delaware region. Read more, or watch a video about the ship on www.snjtoday.com.

Tides is the marine news round-up from New Jersey Sea Grant Consortium.  We scour the Garden State’s press and broadcasters for reports on several key topics related to the consortium’s research and research extension. The consortium employs five research extension agents and maintains an expertise database of marine science researchers, who can be called upon to offer their insights for reporters covering New Jersey’s coastal environments.