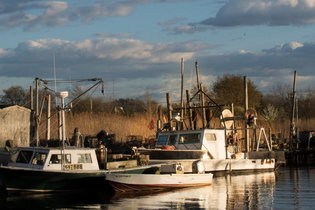 Last week, one forecasting model predicted a New Jersey strike, but meteorologists interviewed by NJ.com were largely unconcerned. On Aug. 29, Erika dissipated over Eastern Cuba, according to a report on Weather.com.

One of the biggest digs at New Jersey is there is a cost to walk. Officials in Seaside Heights planned to charge for beach access after Labor Day, which is against custom in most locations. But they’ve reversed that decision, according to Newsworks.org. Lifeguards will remain on duty in a limited capacity through September.

NJTV News —Fisherman Say Industry is Dying in NJ — A new survey by the National Marine Fisheries Service notes Sandy wreaked $250 million worth of uninsured losses and damage to New Jersey’s fishing industry, and about three quarters of Jersey’s fishing-related businesses reported revenues down by a third, a year after the storm. Read more.

The Record — A Shore Thing: Cape May Salt oyster making a comeback — The Cape May Salt became the first Ark of Taste project of Slow Food USA, which works to preserve and share local foods and food cultures. In 2002, it was awarded the Slow Food Presidium status, which is reserved for an heirloom, endangered, or lost food item. Read more.

Press of Atlantic City — Lawmakers want Garden State to be nicer to fish-farmers — Entrepreneurs who want to start oyster farms in South Jersey say New Jersey’s regulations are a hard shell to crack. No fewer than 11 state and federal agencies typically have some say over the commercial use of New Jersey’s waterways. This sometimes leads to contradictory instructions and other conflicts that can tangle businesses in needless red tape, industry officials said. Read more.

The Record — N.J.’s push for offshore wind farms loses steam — The state Board of Public Utilities has repeatedly rejected a proposal by Fishermen’s Energy to build a small wind farm off the coast of Atlantic City as a pilot project. And five years after the Legislature directed it to do so, the board has yet to complete an essential funding mechanism for offshore wind projects that would guarantee a buyer for the energy they produce. Read more.

The Record — Scouring the Meadowlands for the elusive clam shrimp — In the Northeast  and nearby states, clam shrimp had been documented in only a few locations in Ohio, Pennsylvania and Massachusetts. Then, Kiviat and Schmidt wrote a scientific paper in 2007 detailing their discovery of clam shrimp in three places in the Hudson Valley in New York – and one spot in the Meadowlands. Read more.

The Independent — Bayshore in line for $72 million for mitigation projects — The New Jersey Department of Environmental Protection Commissioner, Bob Martin, announced a bill providing for nearly $2 billion in financing for drinking and wastewater facilities across the state at an Aug. 27 press conference. Nearly $800 million is earmarked for projects to protect facilities from future storms and floods including $72 million for the Bayshore Regional Sewerage Authority. Read more.

Asbury Park Press — New Jersey expands key Sandy program — Homeowners in New Jersey’s primary superstorm Sandy rebuilding program are no longer required to have a mortgage in order to qualify for rental assistance, according to an announcement from the New Jersey Department of Community Affairs. Read more.

The News Journal — Delaware regional fishing report — The focus for most Delaware Bay fishermen continued to be on summer flounder, with quality fishing available from the wrecks and reef sites off of Lewes to the waters off of Port Mahon. Read more.

MyVeronaNJ.com — Surfing when you can’t stand — Chesney has been paralyzed from the waist down since the age of 15 due to a spinal stroke. Once a star athlete at Verona High School, Chesney has never let a wheelchair get in the way of where he wanted to get in life. So when he decided this past winter that he was going to learn to surf, it was clear to all who know him that, well, he was going to learn to surf. Read more.

The Jersey Shoreline is the marine news round-up from New Jersey Sea Grant Consortium.  We scour the Garden State’s press and broadcasters for reports on several key topics related to the consortium’s research and research extension.

The consortium employs five research extension agents and maintains an expertise database of marine science researchers, who can be called upon to offer their insights for reporters covering New Jersey’s coastal environments.