May 23rd, 2022
On Friday, May 6, 2022, a team of Stevens Institute of Technology Computer Science students presented their Senior Design Project Coastal FloodHub at Stevens’ Annual Innovation Expo. Coastal FloodHub is a mobile app that will inform users in the New York and New Jersey region of tidal and storm flooding hazards. The app will also serve to further community science data collection and research while also assisting the user and their community for flood resilience needs. 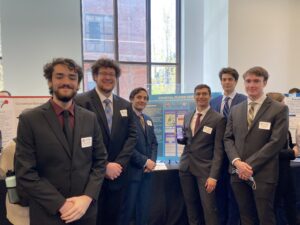 In the past, Stevens had produced the highly-regarded peer-reviewed Stevens Flood Advisory System (SFAS), a desktop optimized visualization website that produces email notifications of forecasted flooding throughout the New York/New Jersey region.  However, it was regarded as too complicated by some users. The new Coastal FloodHub simplifies the forecast data and warnings into a more accessible format designed for your phone making these forecasts accessible for quick decision making.

Coastal FloodHub applications don’t stop there. Users can use the app to send in their own reports of flooding to various organizations collecting community science flood data. Alternatively, it can simply be used for keeping individual records of flooding in particular areas.

NJSGC Coastal Resilience Specialist, Laura Kerr, recruited an advisory team from Stevens Institute of Technology and New York and New Jersey Sea Grants to advise the student on the app applications, while the students developed the product for the advisory team.  Now that their project is complete, the Senior Design Team is currently working on getting the app pushed up to the Apple App and Google Play stores.  Soon, volunteers from coastal communities will be needed to use the app and provide feedback for version 2.0.