The Jersey Shoreline: Week of Aug. 14 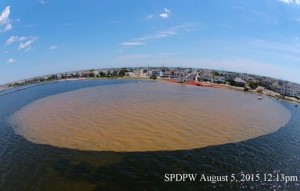 This is a round-up of the week’s marine science and marine recreation news throughout the state from Aug. 8 to Aug. 14.

The biggest news this week was a mysterious, circular brown plume that appeared in Barnegat Bay, and the death of a dolphin that strayed into the fresh waters of the South River.

New Jersey Sea Grant Consortium provides funding to Rutgers University Water Resources Program at Cook College. Michelle Hartman, the consortium’s water resources expert based there, can provide insight for stories such as the brown plume in Barnegat Bay. And the consortium’s Director of Research & Extension, Dr. Peter Rowe, is a good source on stories like the death of the dolphin.

Now, to the round-up:

MICROMEDIA PUBLICATIONS, Aug. 14, 2015 — Stinging jellyfish have plagued northern sections of Barnegat Bay for years and their population peaks at about the same time as the tourist season hits its high. But Dr. Paul Bologna, of Montclair State University and NJSGC researcher, told the environmental activist group Save Barnegat Bay that sea nettle populations have dropped. The nuisance jellies are competing with other species in the bay, he said. The cause for the decline in sea nettles has not been exactly determined. However, one hypothesis is that vinyl docks and bulkheads, where polyps (baby sea nettles) thrive, were destroyed or removed after the storm. Read more.

Asbury Park Press/APP.com, Aug. 14, 2015 — The Press compiles a weekly report culled from reports of bait shop owners and ship captains about what’s biting and what’s not in six zones from the Verrazano Narrows to the Absecon Inlet. Read more.

NEWSWORKS.ORG/WHYY, Down the Shore Blog, Aug. 13, 2015 —  The Ocean County Health Department banned swimming two days at the 5th Avenue Beach in Seaside Park on the Barnegat Bay due to high levels of bacteria. The beach is now open for swimming. Read more.

ABC NEWS, Aug. 12, 2015 — A large brown plume spotted in Barnegat Bay near  Seaside Park, New Jersey is worried residents, lawmakers and environmental advocates. The circular, brown mass was initially flagged last Wednesday by nearby beachgoers who initially fled, thinking sewage was draining into the bay, according to Britta Wenzel, the executive director of environmental advocacy group Save Barnegat Bay. The plume was a combination of silt that was flushed out of an outfall pipe and silt kicked up from the bay floor, officials said. Read more.

Man swims to shore after stranded on buoy in ocean overnight

NJ.com, Aug. 12, 2015 — A 19-year-old man swam to shore early Wednesday morning after clinging to a buoy all night. He had abandoned his personal watercraft after it broke down on a trip from Brooklyn to Highlands across the New York Bight. The Coast Guard, New Jersey and New York authorities launched a search for the man at about 7:30 p.m. Tuesday. Read more.

State Legislature Inquires Into Pollution on the Shore

PolitickerNJ, Aug. 10, 2015 — The Senate Environment and Energy Committee and the Assembly Environment and Solid Waste Committee heard testimony on Monday to address pollution from reconstruction efforts in Barnegat Bay and other areas hit by Hurricane Sandy. The committee also praised the clean-up of the Edwin B. Forsythe National Wildlife Refuge while calling for stricter soil restoration standards for developers following major construction projects. Read more.

NJ.com, Aug. 8, 2015 — A dolphin that strayed into the South River died Saturday after rescue teams tried to save the animal, a marine rescue group said. The dolphin was spotted in the river Aug. 5 and teams with the Brigantine-based Marine Mammal Stranding Center initially tried using a boat to coax the animal to swim toward the Raritan Bay. Read more.

If you think we missed something, email Matthew McGrath.